Get it while it’s still a buck…

I’ve submitted a price change to Kindle for Jokers & Fools, from .99 to 2.99. If you haven’t gotten it and want to, now is the time, before it takes effect.

I’ll be your warm-up comedian today…

I have a guest blog post at Must Read Mysteries today. The topic is Death and Comedy, and it ends with one of my favorite jokes. As an appetizer for that, here’s another of my faves.

A guy starts to develop black spots on his penis. Naturally, he’s concerned, so he goes to see a doctor. The doctor takes one look and says, “I’m very sorry, but you have Chinese Black Gonorrhea, and we’re going to have to amputate your penis.”

The guy is stunned. “You’ll understand if I get a second opinion.”

The doctor nods. “Of course, but any other doctor will tell you the same thing.”

So the guy gets a second opinion, and a third, but both of those doctors tell him the same thing. His penis will have to be amputated.

He goes out drinking with his best friend and tells him the news.They sit in glum silence for a while.

“Then why don’t you go to China and see a doctor there? Maybe they know a treatment that hasn’t made it to the States yet!”

So he books a plane ticket and visits a well-respected Chinese doctor who speaks English. The Chinese doctor makes a thorough exam, runs some tests, and finally comes back in. “It’s Chinese Black Gonorrhea, all right.”

“So is there any treatment?” the guy asks. “Because in America, all the doctors tell me that I have to have my penis amputated.”

The Chinese doctor breaks into laughter. “Those American doctors! What a bunch of quacks!”

The guy feels hope for the first time. “Are you telling me I don’t have to have my penis amputated?”

Thank you, you’ve been a great audience! I hope you enjoy the second act, now appearing at Must Read Mysteries!

Must Read Mysteries not only sells print mysteries, but also makes readers aware of new releases, sales, and free ebook mysteries through their Facebook page. They’re a fantastic resource, so I was extremely geeked when Mr. Must Read Mysteries (Scott) asked if I’d like to guest post on their blog.

You can find me there tomorrow, Wednesday, writing on Death and Comedy. I think it’s worth reading if only for the joke at the end.

I was upstairs at the computer when I heard Josie O whining downstairs. I ignored her, as usual, but it kept up for longer than usual, so I decided to make sure nothing was wrong. She was standing at the bottom of the stairs with her head stuck in her chipmunk stump toy.

I know I should have taken a picture, but I felt too bad for her. Her ear was sticking out one of the holes and everything. It was really pathetic.

Josie weighed 2 lbs. 10 ozs. mid-morning on our digital postal scale. The weight chart for Chihuahuas projects her at 4 lbs as an adult. I think that was the projection when she was born, too. Apparently these things are pretty accurate.

We took our longest walk yet this morning, around a full block plus a bit. She behaved really well, with only a little random woofing. Didn’t see any other dogs.  Sorry I didn’t get a better photo. Am still getting used to everything, and seem to have too few hands.

Scary Chihuahua Stories Around the Campfire

Chihuahuas have almost no downside. They’re portable, good-tempered, quieter than the average dog (you heard that right – they don’t bark more than average dogs and their bark is quieter), reasonably healthy (they’re prone to seizures and tooth decay), long-lived (14-17 years, on average), most of them can’t get on the furniture unless you provide a set of stairs, they’ll never drag stuff off the kitchen counter, and you can train them to use the indoor potty system of your choice. So what’s the catch?

Chihuahuas are so fragile that I have been told many firsthand stories about Chihuahuas dying in freakishly easy ways, simply because of their size.

[Chi mommies who have lost pets tragically, you should stop reading now and look at cute puppy pictures instead. But if you’re planning on or considering Chihuahua ownership (or any other small breed), you should be aware of the risks. Don’t worry – there are no grim pictures, and I’ve tried to keep things on the lighter side.]

One of the rules of humor is that a lot of anything starts to get funny. People warned me about so many ways Chihuahuas had been known to die that it got darkly ridiculous (but don’t think I’m not grateful – I am). It got so I’d wander into Angel Joe’s office and say something like, “Just heard a new one. Chihuahua fell out of a puppy purse during a blender demonstration at the Home Show.” (That did not happen.)

So I’ve create an educational quiz, to highlight the risks and responsibilities of owning a tiny dog. See if you can pick the real ways in which Chis have perished versus ones I made up. (Of course, the ones I made up could have happened.)

All right. Here are the answers.

Fell from a standing person’s arms. Yup. Usually when a puppy.

Crushed trachea. This is a trick question, because their tracheas can be crushed (you should always walk them with a harness), but I’ve never heard of one dying right away from it. Usually the breathing problems result in heart trouble, and that eventually does them in.

Fell off stairs through bannister railing. Heard that from several people, including my vet. In fact, I think I heard of one that just fell down the stairs and died. We have become paranoid about keeping the door to the basement shut.

Ran into wall chasing toy, broke neck. Actually, it was a coffee table leg. Probably the most shocking one I heard, as it happened right in front of the owner. Horrible.

Drowned in toilet. Don’t be ridiculous. How could they reach a toilet?

Choked on stub of carrot. Yup. Heard that one first hand. She slices the carrots in thin slivers now.

Sat on. Despite the famous cartoon, I haven’t heard of this actually happening. My mother was surprised when I told her. Turns out she sits on her black cat with some regularity when the room is dark. Good thing she’s skinny.

Door closed on head. Made it up. Seems like it could happen, though. Both my mom and I have closed sliding glass doors on our cats’ heads. Cats have hard noggins. Chihuahuas do not.

…and all the rest are true. I think death by house cat was another puppy.

So there you have it – the joys of Chihuahua ownership in the manner of Edward Gorey. Turns out that the price of owning an adorable, convenient dog is constant vigilance. Some things to consider before getting one:

Chihuahuas, alone among dogs, have a soft spot on their skulls that never goes away.

Those little twig legs and tiny ribcages are delicate enough that you should never have a Chihuahua if you have young children. Seriously. I’d probably wait until the kid is seven.

For similar reasons, it’s inadvisable to own a Chihuahua if you are an alcoholic, have vertigo, or are very unsteady on your feet for any reason. Those who own Chihuahuas often develop what Nancy, my dog’s co-breeder, calls “the Chihuahua shuffle,” a manner of walking that doesn’t lift the feet, so tiny toes can’t get caught beneath your shoes.

When walking a Chihuahua, you need to constantly scan the surroundings for  unleashed  large dogs or, depending on your neighborhood, wild animals. Never walk a Chihuahua off leash, and always use a harness. You need to be able to pull that sucker off the ground like a yo yo.

Your decor and landscaping may suffer from having chick wire, orange webbing or Plexiglas over the open spaces between bannisters, deck railings and fences.

You should never leave your Cihuahua alone in a fenced yard, because of birds of prey. Oh, and avoid gator-filled swamps. But that’s a good idea anyway. 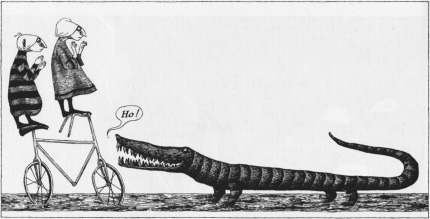 Cat and Puppy, Emphasis on Cat

Yesterday I fed treats jointly to Musette la Plume (cat) and Josie O (Chihuahua puppy), as part of my ongoing work to have the cat get used to the dog. Josie was on the floor, and Musette was on the second step up. After I felt they’d had enough treats, I started petting them, but Josie was in a rambunctious mood and put her front paws on the bottom step, trying to reach the cat. Musette hissed at her – once, twice, and then she bopped the puppy on top of her little head. Honestly, I’ve been waiting for Musette to grow a pair of big-girl titties, to mix a whole bunch of metaphors. Josie yelped once, and not very loudly (she can be a real drama queen). I checked, and saw nary a mark. I do think Musette understands that Josie is a baby, so she must have kept her claws in. Man, she’s fast. I’ve always been in awe of cats’ physical abilities. They’re such perfect predators; right up there with sharks.

Unfortunately, the kitty machismo probably won’t last. It takes a long time for Musette to learn stuff, or possibly she doesn’t want to. She continues to run across the living room to the stairs if Josie is there, unless I’m there to distract/restrain all 2.5 pounds of puppy menace. I’ve  moved one of the cat posts next to my desk, so Zetty can look out the window and get the occasional butt scratch instead of occupying my lap. She’s still a very happy cat. She’s especially happy that she gets two wet meals a day, which she didn’t before. Life is a mix of shadows and light, small dogs and canned food.

Josie is doing very well on walks, although for the first time today, she decided the outdoors was overrated and she wanted to go back home. Might have been too chilly, or maybe she smelled something scary, dunno. Yesterday was in the 60s, and we got two walks in. Twice people in cars stopped to talk to me about her and pet her from their windows. She didn’t even have a cute little sweater on, just her harness. We live in a town that mostly owns big dogs, suitable for back country hiking and swimming in the creek, so Josie is a novelty. Me, I wanted a dog suitable for neighborhood strolls and sitting on my table at outdoor coffee shops.